THE PILLAR OF FIRE PHOTOGRAPHED 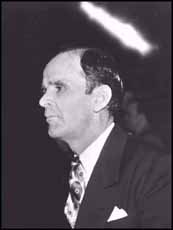 In Houston, Texas, in January of 1950, an amazing photograph was taken by the Douglas Studios. In the photograph, there appeared a light above the head of Brother Branham in a halo-like form. The negative was taken to George J. Lacy, Examiner of Questioned Documents, in order to determine whether or not the light could have been the result of improper exposure, developing or retouching. This investigation served to completely authenticate the fact that the unusual brightness was definitely caused by a light striking the negative. Mr. Lacy was quoted as saying, "Rev. Branham, you will die like all other mortals, but as long as there is a Christian civilization, your picture will live on."

A certain hostile clergyman who opposed Divine healing, denounced the remarks of Rev. F. F. Bosworth (who spoke during many of the day services) and issued a public challenge through the newspapers, to debate with Rev. Bosworth on the subject of "Divine Healing Through the Atonement." Rev. Bosworth ask and received Bro. Branham's permission to accept the challenge. He cautioned Brother Bosworth against being argumentative over the Word. The whole matter was given front-page publicity in the Houston newspapers.

On the evening appointed as the meeting got under way, it was quite apparent that the sympathy of the vast audience was almost entirely on the side of the visiting evangelists. Large numbers of the members of the very denomination of the opposing clergyman, stood to their feet as witnesses that they believed in Divine healing and had in fact been healed. This sentiment became increasingly evident throughout the service.

Now it so happened that the opposing clergyman had secured the services of Mr. James Ayers and Mr. Ted Kipperman, professional photographers who were to take a series of pictures of him while he was speaking. Incidentally, the photographer after taking these shots, secured one picture of Rev. Branham, who spoke briefly just before the service closed.

When Mr. Ayers, one of the photographers, went that same night to the darkroom of his studio, he decided to develop the negatives that had been exposed. To his surprise every one of the negatives turned out to be absolutely blank with the exception of the one which had been taken of Rev. Branham. His surprise turned to amazement when he noticed that on this negative, immediately over the head of Rev. Branham, was apparently a supernatural halo of light. Mr. Ayers called the others of the studio to look at the negative; but when they did so, each was equally puzzled and no one could explain the presence of this halo.

The following morning the photographer sent word to Rev. Branham to inform him of the strange phenomenon that had occurred in connection with the photograph he had taken the night before. Brother Branham then explained to the young man that he was not greatly surprised. He testified that just before the picture was taken he heard the Pillar of Fire descend into the building with a sound of rushing wind.

The following scanned image is that of the statement released by  George J. Lacy. (This document is 2 pages, use your scroll bar to see second page, to the right)

The following is a first hand account of the experience when the photograph was taken at the Houston Coliseum. Excerpt from the sermon Brother Branham preached called The Angel of the Lord.

Los Angeles, CA   May 2, 1951
Then down at Houston, Texas, when a... own... Right in my own faith, the Baptist church, a minister discussing before many many thousands of people there in a big stadium. They was all discussing. This minister said, "I'd like to see that miracle worker. I like to see him," just acting smart.

And Doctor Bosworth, he was the manager at that time, said, "I know Brother Branham's in here." I was up in balcony thirty. He said, "If he wants to come down and dismiss the audience, all right."

When I walked down, I said, "Brethren, I only testify for the truth. I am not a Divine healer." I said, "My literature is published practically in every language under heaven; I've spoke direct or indirect to around five or six million people. And never did I ever say that I was a Divine healer. But to the contrary, I said Jesus Christ is the only Healer there is." I said, "He has sent me with signs and wonders," I said, "which is infallible. I can prove that tonight." I said, "That's infallible. And if I speak the truth, God will testify of me. If I speak not the truth, He will have nothing to do with me."

And about that time from heaven, here He come whirling down where I was at before thirty thousand people. There It whirled down.

And a photographer who had been hired, on the American Photographer's Association, come there to take six pictures of the man that was holding the debate--by the enemy. He snapped six pictures of him. And they asked all of them, the Look, Life, and Time, and them reporters to get back, take no pictures because they sell them. And this man run forward and shot a picture of It. And that night...

He was an Orthodox Jew. The other man that was with him was a Roman Catholic. They took the picture home, put it in the--the acids to develop it. And to find out... And when they brought it out, my enemy's picture... Not my enemy, I wouldn't say that. He was an enemy of Christ, saying that he did... even denied healing of Christ. He said, "Lazarus died, and Jesus spay--supposed to rise him again," said, "then he died again."

He said, "When this corruption puts on incorruption, this mortal put on immortality."

Notice. And then when the man pulled out those six pictures of the minister that was debating that the Divine healing, and I was a devil and so forth. Every one of them was solid black and blank. There's his name and address. Send to the American Photographers Association and find out.

When he pulled out the one he snapped, there was the Angel of God's picture whirling around where I was at. The first time in all the world's history that a supernatural Being was ever photographed.

It was rushed to Washington, D.C., copyrighted, sent back and give to George J. Lacy, J. Edgar Hoover's, examiner. They kept it two days at the Shell Building in Houston.

And when he come over there, and they all set out there together to find out what it was all about, he said, "Who's name is Branham?"

He said, "Stand up." He looked, said, "Mr. Branham, you'll die like all mortals do. But as long as there's a Christian civilization, your picture will never die." He said, "Because it's the first time in all the world's history that a supernatural Being was ever photographed." He said, "The old hypocrite has always said, "They... Scientifically, you can't prove there is a God." But said, "That has to be changed now, for here's scientifically... The Angel of God was there, and the Light struck the negative." There it was. There he signed... wrote out a big document, signed his name to it. There it is right back there. You can look at it yourself. There's the Angel of the Lord.

MINNEAPOLIS.MN  July 14, 1950
Brother  Gordon  Lindsay, explains the picture, in the text of which follows:

He says, "Absolutely, I can." So he took it--cost us a considerable sum because he was a scientist engaged in that work-- and examined it many hours in his laboratory. And then, with his own name signed underneath it, he declared that the negative was absolutely, absolutely, positively genuine.

May I just add this word: The picture was taken by a hostile photographer, one that had spoken against the meeting. Fact he... The statement even got in the newspaper, and he was as surprised as anyone.

They were Jews, Orthodox Jews, and so, I regard this merely as a verification and confirmation. And Brother Branham regards it--not that he is supernatural in any way--but a verification of his ministry and message of bringing Divine healing to the people of the world. Friends, I believe the Bible is true. And so tonight, as Brother Branham ministers, may we all be in the Spirit of God, and realize that the supernatural is here tonight to deliver people, not only heal them, but to heal their souls, bring men and women to Jesus Christ.”